Putting Your Stamp On It 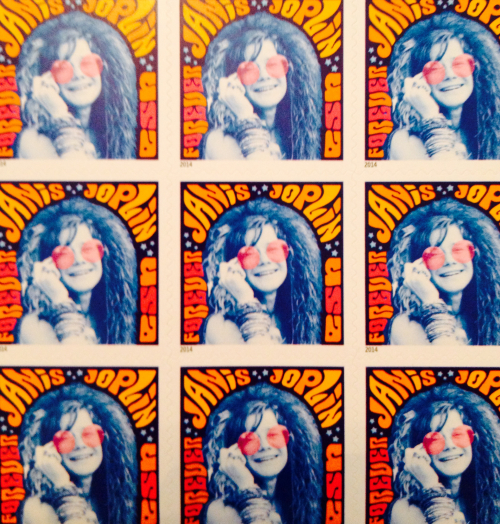 Part 22 of the Here We Are Series: Live Your Life Out Loud

Recently I saw a television commercial for Miss Dior perfume starring Natalie Portman (you can see the full director's cut here) which also features a soundtrack of Janis Joplin singing her famous song, "Piece of My Heart." It sounds like an original version - circa 1968 - showcasing her depth, emotion, and angst behind every word.

I had been thinking about August being Legacy month when I first saw the advertisement. And about women who throw caution to the wind, do things their own way, and stomp down a road less traveled (also a theme in the plot of the video). Janis Joplin was and will always be a trailblazer who owned her artistic ability, regardless of her personal demons. All the music she made, the style she influenced, and the take-no-prisoners attitude cemented her legacy. Now, almost 50 years later, she is still influencing the narrative in pop culture; and even getting her image on an actual stamp, an honor once reserved for only the more mainstream (read, "respectable") influencers.

In this commercial video, her music is the backdrop to the story. What it shows us is that when you truly put your stamp on something, your efforts can and will effect generations. Most people do not have a "Janis Joplin-esque" story as their biographical lineage, yet there are countless other women we can look to for the strength of their stamps on society. Women like Gertrude Ederle, Margaretha Zelle (AKA Mata Hari), Lucy Stone, Julia Child, Coco Chanel, and Mother Teresa to name a few. From an athlete, a spy, a suffragette, a designer, a chef, and a nun, we see how applying focused actions can change the world, one woman, one action at a time. They - like Janis - found their voices, and lived their lives out loud.

It doesn't matter what you do, it only matters that you make it your own; put your own stamp on things without fear, hesitation, or excuses. Easier said than done, I realize, but when examining your own legacy, the necessity to leave your mark can and will outweigh all else if you let it.

What do you think? How do you put your stamp on your present actions? Share a tip with other women on what you are doing to focus on the change you want to make in your life and others.

We hope you enjoyed this content brought to you by Better Brighter Easier - Creator of ROOMIGATOR™ The Natural Neutralizer.
🌲Buy A Bottle, Plant A Tree🌲