No Guts, No Glory 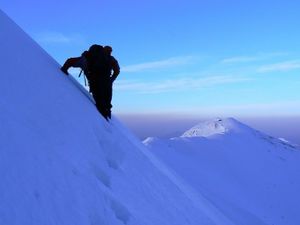 Having trouble achieving your dreams? You must begin the process of Think It, See It, Believe It, Be It. This isn't mumbo jumbo; many who have reached out and grabbed what they wanted began this way. The simple truth is that thoughts become things... think about the Eiffel Tower, aviation, and the Internet, to name a few. They all started as a thought honed by a mental vision, supported by a belief that allowed its materialization.

If you dream of doing anything, remember the words of William Hutchinson Murray who climbed Mount Everest in 1951:

Concerning all acts of initiative (and creation), there is one elementary truth, the ignorance of which kills countless ideas and splendid plans; that the moment one definitely commits oneself, then Providence moves too. All sorts of things occur to help one that would never otherwise have occurred. A whole stream of events issue from the decision, raising in one's favor all manner of unforeseen incidents and meetings and material assistance which no man could have dreamed would have come his way. Don't be afraid. Think it through, envision what you want, believe in yourself, it will become yours.